For the following analysis I chose Counter Strike: Global Offensive (CS:GO), a first person shooter (FPS) multiplayer online game considered one of the best title of all time in its genre.

Why I choose it:

CS:GO has a system that provide to the player a relatively limited number of elements, but thanks to the many uses and interactions with them, the system generates a lot of dynamics and an incredible gameplay depth.

CS:GO is a game based on the Depth, rather than on the Breadth.

I have divided into three phases the CS:GO learning cycles based on their complexity and length:

“The learning curve is the representation of the learning related to the time invested”.
CS:GO uses a S-curve for the learning, the most common type. 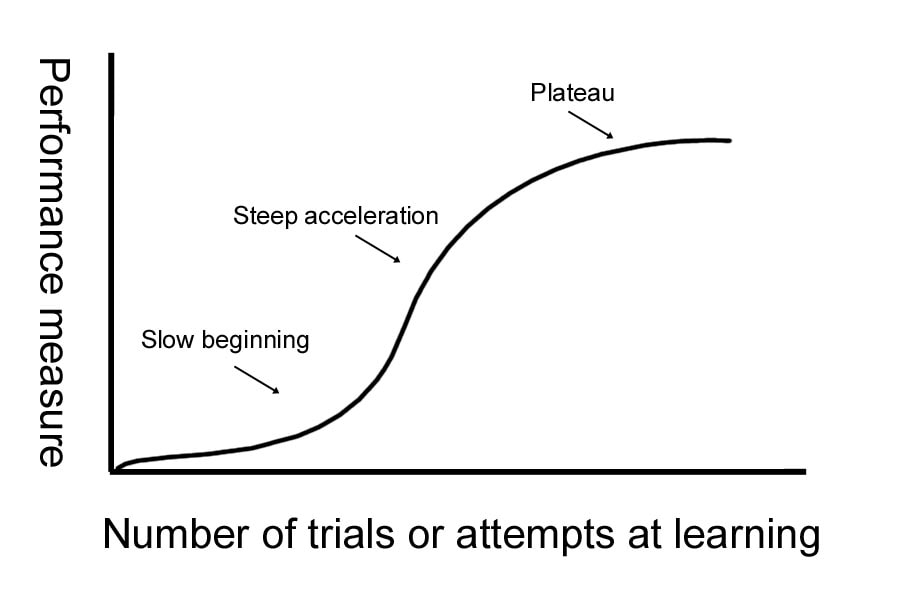 These are the phase that every S-Curve uses:

Thanks to the Kolb’s Learning Styles (following table), I analyze each step of the learning curve, to understand which typology of learning style CS:GO uses to teach the informations to the player.

This table shows which Learning Styles are used in the three main steps of the Learning Curve:

The Steep Acceleration phase continues till the player finds a large quantity of new informations to learn, overtaken a determined limit the player starts to know almost every information about the game so the learning slows down and this phase ends.

CS:GO is a fast paced game based on rapid actions, in wich even milliseconds make the difference. Its purpose is to make the player understand very quickly what happens in the game, to make it happen, it has a stimuli transmission system made in a maniacal way.

This technique is one of the main pillar of the design of CS:GO, because the game make sure that there are not elements that create noise and confusion in the player perception.

For example, the noise removing is used in the graphical and structural composition of the maps in the game.

A lot of player are complaining that CS:GO is a game with a “bad” graphic, as it does not reach the realism level of other multiplayer online titles.
The gaunt graphic is voluntarily maintained in the game, as with its simplicity does  not create any form of noise and the game results very clear.

Here are explained some techniques that are used in CS:GO to reduce the noise from a graphical point of view:

“The Stimuli pairing is the subject’s capacity to associate two or more stimuli, giving to them the same response” (Pavlov’s Experiment).

CS:GO uses the stimuli pairing as a reinforcer to emphasize the informations that are transferred from the player to the game and vice versa.
Some informations are transmitted using more than one conditional stimuli, as the player has more chance to notice at least one of them, providing the right response.

To understand the stimuli pairing we have to know the stimuli transmission channels (Neil Feming Learning Style), that are the way in which the stimuli are presented to the player.

The most important information are transmitted to the player using all the channels to be sure that the he perceives at least one of them and performs the response.

To demonstrate the stimuli pairing used in CS:GO, I have analyzed one of the most important informations transmitted: “let understand to the player when performs a kill”.

CS:GO uses all the stimuli transmission channels to communicate this information to the player:

All these paired stimuli are presented to the player at the same time (indeed there is a little delay) because the Simultaneous Conditioning is the stimuli pairing typology that offers the best results.

“The Operant Conditioning establishes that in the learning process the subject’s behavior is modified by Reinforcers and Punishments”.

CS:GO being a multiplayer online game in which real players play, the Operant Conditioning is not only from the system to the player (System based) but is also from the players to other players (Player based).

Below there is the graph that reassumes the analysis that I made about the CS:GO ecosystem (based on Bartle’s model): 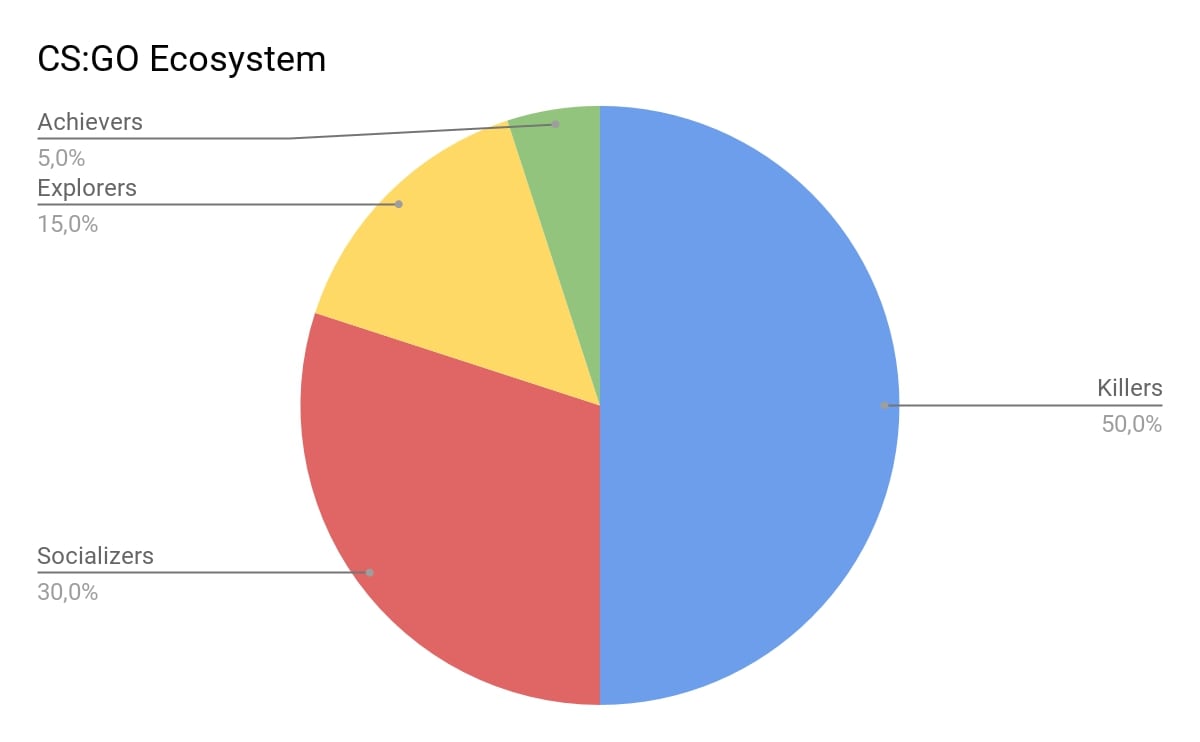 They are the player’s majority as the main activity in a multiplayer Agon based game like CS:GO is win the direct conflicts against the other players.
The latter being real and not controlled by an IA, make the game more interesting for the Killers because they know that in the other part of the screen there are other real players to dominate.

CS:GO does not teach in a explicit way how the game system works, for this reason the community every day uploades hundreds of videos, lives streams, tutorials, documents and analysis to help each other to better understand the game.

They are not very numerous because only few players are interested in interaction with the game world. They have a fundamental role in the CS:GO ecosystem, because they find new strategies, new secrets, bugs… And with the support of the socializers, these contents are disclosed to the community.

CS:GO permits to the explorers to create new contents with its engine, like a simple tool box that gives the possibility to create whatever they want.

They are the smaller part of the ecosystem, because the game has a design based on Dominance.
The mechanics that supports the achievers are the level up and challenge system that give points and medals to the players.
These mechanics were inserted into the game four years later from the original release, because the game is very solid and deep even without them. 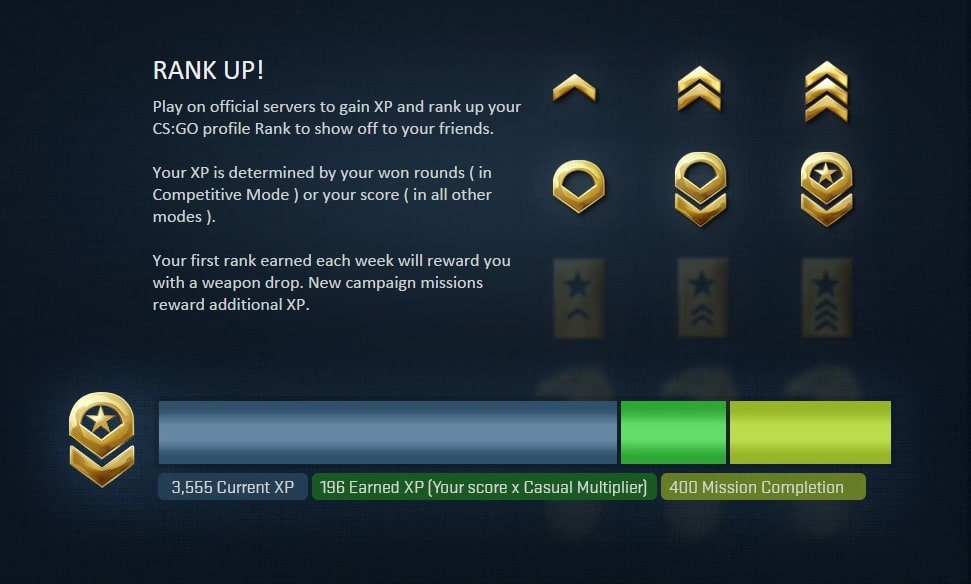 by Federico Boccardo
in Uncategorized
0
0

Design and Psychology evolution from Premium to F2P games